Mount Huashan is located in Huayin, part of the Shaanxi province in China. Huashan has a variety of temples and other religious structures on its slopes and peaks. The teahouse, which was once an ancient Taoist temple, is located on the south side of the mountain, at an altitude of 7,000 feet (2,133 meters) above sea level. The journey to the remote teahouse starts with a 20-minute cable car ride. Next the visitor will have to hang onto a chain bolted into the mountain and slot their feet into holds chiseled into the sheer rock face. And finally the visitor will have to ascend the Heavenly Stairs. Impossible pathways and stairs leading to the mountain’s peaks that have been carved all over the mountain by monks, nuns and pilgrims. Despite the dangers nearly a million people a year visit the Buddhist and Taoist temple and Huashan Teahouse.

END_OF_DOCUMENT_TOKEN_TO_BE_REPLACED

Havasu Falls is a waterfall located in the Grand Canyon, Arizona. The water flows out of limestone, which gives it a pleasing blue-green hue, into a series of plunge pools.

END_OF_DOCUMENT_TOKEN_TO_BE_REPLACED

Shiprock is an isolated rock rising above the high-desert plain of the Navajo Nation in San Juan County, New Mexico. It is the erosional remnant of the throat of a volcano formed around 30 million years ago,. Governed by the Navajo Nation, the formation plays a significant role in Navajo religion, myth, and tradition. In Navajo called Tsé Bitʼaʼí or “the rock with wings,” myth says that the Shiprock was a piece of land that became a bird, carrying the ancestral people of the Navajo on its back. The name “Shiprock” derives from the peak’s resemblance to an enormous 19th-century clipper ship. Due to recent deaths, littering, and vandalism hiking, filming, and driving are all prohibited to the public due to its sacred nature and its sacred space. It is recommended that the public stay at least three miles (4.8 km) away from the formation and 20 feet (6.1 m) from the lava dikes or wall when visiting.
END_OF_DOCUMENT_TOKEN_TO_BE_REPLACED 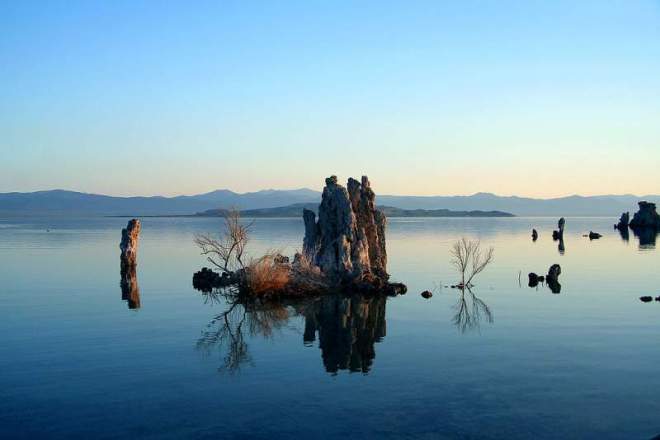 Mono Lake Tufa State Natural Reserve is located near Yosemite National Park within Mono County, in eastern California. The lack of an outlet to the ocean causes high levels of salts to accumulate in the lake. Many columns of limestone rise above the surface of Mono Lake. These limestone towers consist primarily of calcium carbonate minerals. This type of limestone rock is referred to as tufa, which is a term used for limestone that forms in low to moderate temperatures. The tufa originally formed at the bottom of the lake. It took many decades or even centuries to form the well-recognized tufa towers. When lake levels fell, the tufa towers came to rise above the water surface and stand as the majestic pillars seen today.
END_OF_DOCUMENT_TOKEN_TO_BE_REPLACED

By GRAHAMUK at the English language Wikipedia, CC BY-SA 3.0, Link

Kelvin-Helmholtz clouds, also known as  ‘billow clouds’, look like rolling ocean waves in the sky. The clouds often form on windy days, when two air currents of varying speeds meet in the atmosphere. It’s believed that this kind of clouds inspired the swirls in van Gogh’s ‘Starry Night‘.

END_OF_DOCUMENT_TOKEN_TO_BE_REPLACED

Fjaðrárgljúfur is a canyon in south east Iceland. The Fjaðrá river flows through it. The canyon has steep walls and winding water. It is up to 100 m deep and about 2 kilometers long. Its origins date back to the cold periods of the Ice Age, about two million years ago. The canyon was created by progressive erosion by flowing water from glaciers through the rocks and palagonite over millennia. A waterfall flows down the western side of the canyon, visible from an observation platform at the end of a one-mile hike up the eastern edge.
In May 2019, authorities closed the canyon to visitors after it appeared in a music video by Justin Bieber. The resulting stream of visitors threatened to damage the canyon’s environment.
info: wikipedia