Originally invented by the people of the region of Kitayama, the method was used to solve the problem of shortage of seedlings. Daisugi is a Japanese forestry technique where specially planted cedar trees are pruned heavily. like giant bonsai, to produce “shoots” that become perfectly uniform, straight and completely knot free lumber. The shoots are carefully and gently pruned by hand every two years leaving only the top boughs, allowing them to grow straight. Harvesting takes 20 years and old “tree stock” can grow up to a hundred shoots at a time.

Architecture made out of living trees  requires not only using nature as it is but also shaping it to the required form. The first examples of using trees to create living structures are bridges across Asia.

Tree Cathedral Bergamo, Italy
The Cattedrale Vegetale uses trees and branches to create a cathedral-like structure. The frame was completed in 2010 as part of the United Nations’ International Year of Biodiversity, but beech trees take decades to fully mature. 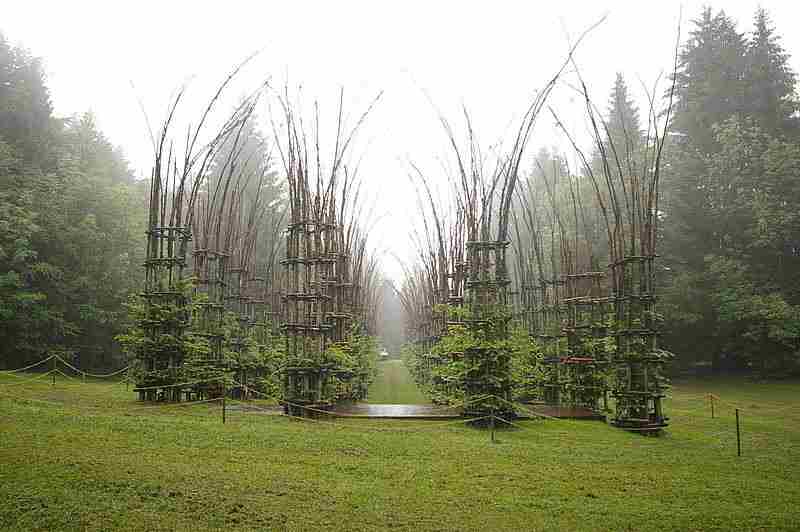 END_OF_DOCUMENT_TOKEN_TO_BE_REPLACED

Ice Stupa was invented by Sonam Wangchuk in Ladakh, India, and the project is undertaken by the NGO Students’ Educational and Cultural Movement of Ladakh. Ladakh is a cold desert and due to climate change, the region experiences hotter summers with increase in melts along with shift in the timing and precipitation of the melts. Subsequently, during the spring season water is more scarce which in turn impacts agriculture and food supplies.
Ice Stupa is a form of glacier grafting technique that creates artificial glaciers , used for storing winter water (which otherwise would go unused) in the form of conical shaped ice heaps.
In October 2013, Sonam Wangchuk created the first prototype of 6 metres (20 ft) Ice Stupa by freezing 150,000 l (40,000 US gal) in Leh without any shade from the sun. Water was piped from upstream using gravity. Electricity or machinery was not used for pumping water. The Ice Stupa did not melt fully till 18 May 2014, even when the temperature was above 20 °C (68 °F).
info: wikipedia 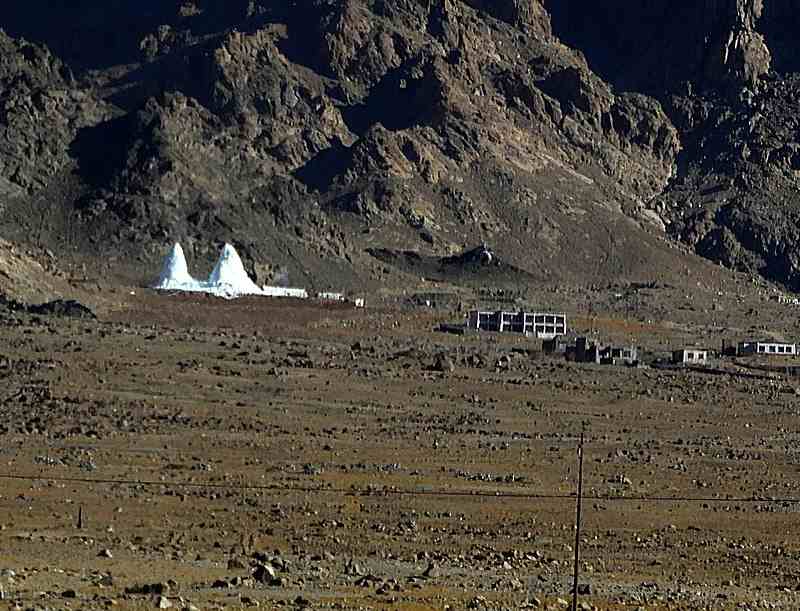 Living Light is a lamp which harvests its energy through the photosynthetic process of the plant. As the plant photosynthesizes, it releases organic compounds into a soil chamber below. The organic matter is broken down by bacteria fostered through a microbial fuel cell. When this happens, electrons are created and transported away from the soil. The electric current is passed along a wire and fed into a ring fitted with LEDs. These light up when a user touches the plant’s leaves.
Dutch designer Ermi van Oers and her team will start off with a small production in 2018. Plans are already in place with Rotterdam to illuminate a city park.

Find out more on livinglight.info 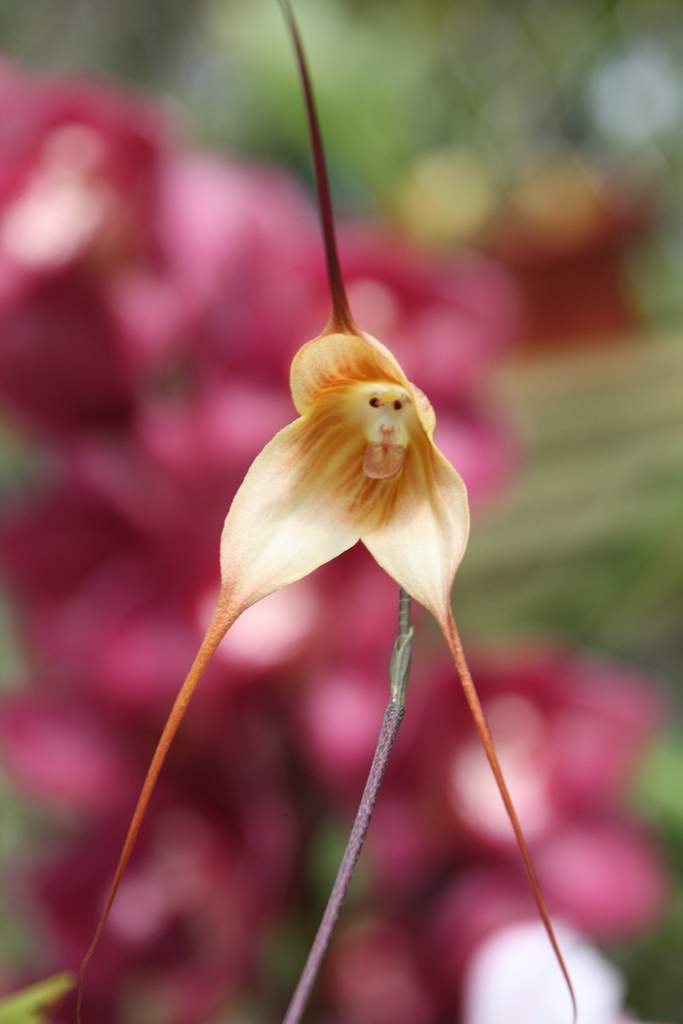 These rare primate-esque flowers are formally known as Dracula simia. They  only grow in the cloud forests of southeastern Ecuador and Peru at elevations of 1,000-2,000 meters on the side of mountains. In the scientific name, “simia” refers to the monkey face and “Dracula” refers to the two long spurs that hang down, almost like fangs.

END_OF_DOCUMENT_TOKEN_TO_BE_REPLACED

Wildlife crossings are structures that allow animals to cross human-made barriers safely. They may include: underpass tunnels, viaducts, and overpasses (mainly for large or herd-type animals), fish ladders and green roofs (for butterflies and birds). Wildlife crossings are a practice in habitat conservation, allowing connections or re-connections between habitats, combating habitat fragmentation. They also assist in avoiding collisions between vehicles and animals, which in addition to killing or injuring wildlife may cause injury to humans and property damage. 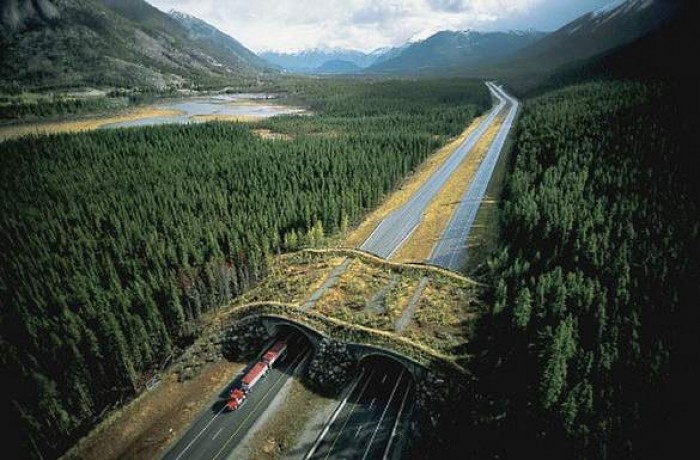 END_OF_DOCUMENT_TOKEN_TO_BE_REPLACED

Zhangjiajie National Forest Park, China, is gifted with a diverse landscape. In Zhangjiajie, there are not only lofty mountains and steep hills but also low valleys and vast plains. The director James Cameron was deeply attracted by the breathtaking natural beauties in Zhangjiajie that some of the images taken in Zhangjiajie were used in the spectacular sci-fi film Avatar to feature the floating “Mt. Hallelujah” in the world of “Pandora”. About 3,000 sandstone monoliths – dagger-point rock spires that rebel against gravity – thrust from 76 percent of the 9,563-square-kilometer wilderness reserve, slicing the partitions of a natural labyrinth replete with hidden caves.
END_OF_DOCUMENT_TOKEN_TO_BE_REPLACED