Acoma Pueblo, in West Central New Mexico, is one of the oldest continuously inhabited communities in the United States along with Hopi pueblos. Acoma tribal traditions estimate that they have lived in the village for more than two thousand years. The Acoma Pueblo emerged by the thirteenth century. However, the Acoma themselves say the Sky City Pueblo was established in the 11th century, with brick buildings. The village is located atop a 111-meter tall table-topped sandstone hill. The isolation and location of the Pueblo has sheltered the community for more than 1,200 years. During the nineteenth century, the Acoma people, while trying to uphold traditional life, also adopted aspects of the once-rejected Spanish culture and religion. By the 1880s, railroads brought increased numbers of settlers and ended the pueblos’ isolation.
Today, about 300 two- and three-story adobe buildings stand on the mesa. Approximately 30 people live permanently on the mesa, with the population increasing on the weekends. The Sky City has no running water, no electricity but an awesome view over the valley.
info wikipedia 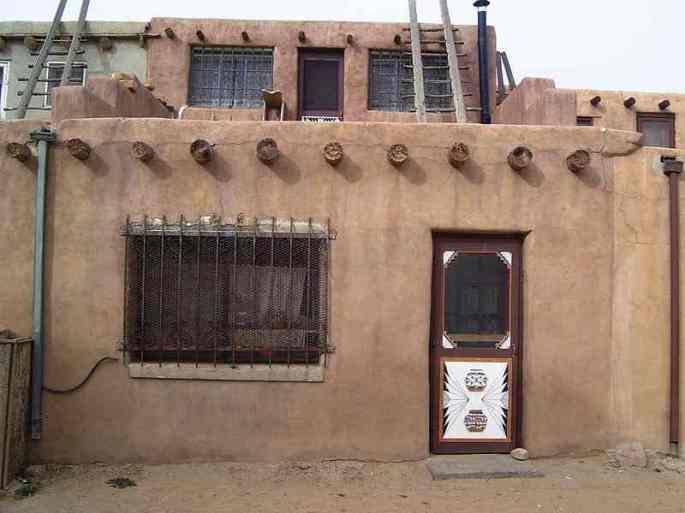 A traditional wooden ladder leads to the second story entrance of a kiva, a religious contemplation chamber
By Ian McKellar – originally posted to Flickr as Acoma Pueblo, CC BY-SA 2.0, Link

A traditional horno, a mud adobe oven
By Beyond My Ken – Own work, CC BY-SA 4.0, Link

The roof of a building in the Sky City of Acoma Pueblo.
By Beyond My Ken – Own work, CC BY-SA 4.0, Link

2 thoughts on “Acoma Sky city atop a sandstone hill”